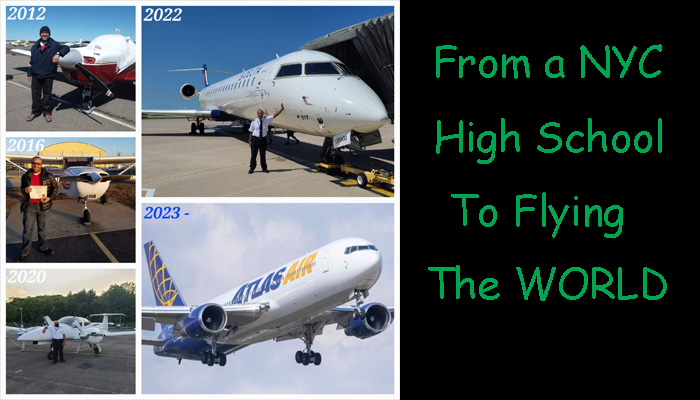 Posted at 13:10h in STEMPilot News by jleboff
20 Likes
Share

Did you ever dream of flying your own plane? Ever have this desire to follow your passion? Well Joshua Rivera did just that. “I have been interested in flying since I was 9 years old.” He is now a licensed Airline Transport Pilot with SkyWest Airlines, operating for Delta, American and United” I just celebrated his 10-year anniversary of his first flight on April 7th, 2012.” Way to go Josh!
If you are not familiar with the story of Joshua Rivera, we are happy to share it now. Joshua was born in New York City, where he became interested in the aeronautics class at the Frederick Douglass Academy, taught by Henry Rey, a certified flight instructor. STEMPilot supplied flight simulators for the classroom and Josh learned to fly on one of these. Henry Rey arranged flight lessons for Josh and he soloed in his senior year of high school.
Jay LeBoff, founder of STEMPilot, became interested in Josh’s aviation goals and STEMPilot has supported Josh through his journey. “We hired Josh to work on developing tutored simulator learning mission for the STEMPilot K12 curriculum and simulators. He taught himself how to write this code, amazing”
“I created these missions while I was still in high school… my goal at the time was to create missions that are simple enough for the kids to learn and introduce them to flying, … so they learned to takeoff, land and control the plane using instruments.” That served as a great segway for students to start thinking about why an airplane is able to fly? That was the mindset I had when creating these missions” says Joshua Rivera – Thanks to his creative thinking, the missions he developed became a nationwide academic sensation in the STEM and Engineering Design education community.
Along with creating flight missions, Josh also had the opportunity to teach a high school class, a summer program at The Cooper Union Engineering School and a class at Fordham University, all while in school. In a way, I didn’t realize that I was going to teach a full class of students, but I eventually was able to plan lesson plans to conduct each class. Basically, how it worked was I would spend ¾ of an hour lecturing the aviation material and towards the end of the class put the students on the simulators using the missions I created.”
Josh was an excellent high school student and earned a full scholarship to Vaughn College of Aeronautics and Technology, in Queens, so he could commute from home. While completing his 4-year degree he also earned his Private Pilot License, Commercial, Instrument, Certified Flight Instructor (CFI) and Certified Flight Instrument Instructor (CFII) ratings, all while in college. Upon graduation Josh started teaching other student pilots until he accrued 1500 hours and his multi-engine rating, required for an Airline Transport Pilot (ATP) license. He was recruited by SkyWest Airlines and is now a First Officer flying a CRJ passenger airliner.
We are so proud of all the achievements Joshua has accomplished over the years and can’t wait to see what else he will achieve in the years to come. “I remember taking a flight to Beijing China, for 14 hours for a high school trip and that sparked my interest in commercial aviation.” In a way I could see myself following this career path in the future. “If you are passionate about something and if this is something that you really like to accomplish in life then by all means do so.”
Josh, now 26, is an example of the possibilities for great careers for K12 STEM students learning “Why is an Airplane Able to Fly?”

Josh has now been recruited to fly 767 airliners around the world. It Can be Done!